Four-legged Robots May Explore the Moon

The Legged Exploration of the Aristarchus Plateau (LEAP) mission is a concept study funded by the European Space Agency (ESA) to design a robot to explore some of the most challenging lunar terrains. Patrick Bambach of the Max Planck Institute for Solar System Research in Germany presented about the project’s progress at the Europlanet Science Congress (EPSC) 2022 in Granada.

The Aristarchus Plateau is a region of the Moon that is extremely rich in geologic features, but is incredibly challenging to access. To access this interesting region on the Moon, the team has trained a four-legged robot through artificial intelligence. This robot is based on the legged robot ANYmal, developed at ETH Zurich, a public research university in Zurich, Switzerland, and its spin-off ANYbotics. 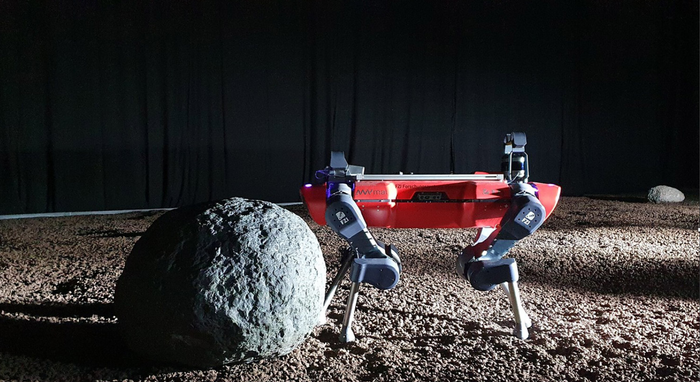 The team hopes the robot will be integrated onto ESA’s European Large Logistic Lander (EL3), which is currently scheduled to land on the Moon multiple times from the late 2020’s to the early 2030’s. This robot should make it easy to investigate exciting regions of the Moon which are important for studying the geologic history and evolution of the Moon, such as ejecta around craters, fresh impact sites, and collapsed lava tubes, where material may not have been altered by space weathering or human impact.

Traditional rover designs have limitations that the team are trying to overcome. For example, the Mars rover Spirit got stuck in sand and had its mission terminated. They are hoping to avoid such problems and design a robot to explore terrain with loose soil, large boulders, and even steel slopes, which are particularly difficult for a robot with wheels.

ANYmal has another advantage to rovers in that it can move in different walking gaits. This will allow the robot to cover large distances in short amounts of time and to climb steep slopes. Additionally, the robot will be able to deploy scientific instruments and recover in the unlikely event of a fall. The robot can also use its legs as tools: to dig channels in the soil, to flip over small rocks – and even boulders – for further inspection, and to pick up samples.

The robot has been trained using a Reinforcement Learning approach in a virtual environment which simulates the lunar terrain, its gravity, and dust properties. It has also been taken out for a hike! In the virtual environment, ANYmal started to use a jumping-like mode of movement, much like the Apollo Astronauts when they walked on the Moon. Thus, the artificial intelligence of the robot realized that jumping can be a much more efficient mode of travel than walking on the Moon.

About the Author
Kristina Punzi, Ph.D.
PhD in Astrophysics
I'm a stellar astrophysicist by training with a passion for formal and informal education and diversity and inclusion in STEM. I love to take a humanistic approach to my work and firmly believe that all of humanity is united under one sky.
You May Also Like
JUL 28, 2022
Space & Astronomy

AUG 14, 2022
Looking Back in Space: NASA's Pioneer Program
This series will explore historic space missions from the start of the Space Age to the present day, including both crew ...
Written By: Laurence Tognetti, MSc
AUG 19, 2022
Chemistry & Physics

AUG 19, 2022
Ever Wondered What Our Universe Sounds Like?
Our Universe is quite a dynamic environment with stars exploding to their deaths, black holes merging, stars being torn ...
Written By: Amanpreet Kaur
SEP 09, 2022
Space & Astronomy

SEP 09, 2022
Perseverance Likes Green Sand with Red Sand
In an array of studies, one published in Science Advances and two published in Science, a large international team of re ...
Written By: Laurence Tognetti, MSc
OCT 19, 2022
Cell & Molecular Biology

OCT 19, 2022
Return of the Zombie Bacteria
Bacterial cells may shut down for many reasons. But how do they know when to wake up? Researchers have found the answer.
Written By: Carmen Leitch
OCT 11, 2022
Space & Astronomy

OCT 11, 2022
'The Life of Her Mind' Episode 2: Dr. Alyssa Rhoden
The Life of Her Mind is dedicated to learning about how these women think — how they think about their careers, di ...
Written By: Mia Wood
Loading Comments...
Content Tags
See more See less
Trending Categories
Upcoming Webinars
Upcoming Virtual Events
Einstein Back W/ Front LR Logo