The James Webb Space Telescope Observes Neptune and its Rings

The James Webb Space Telescope (JWST) has captured its first image of Neptune, and it is the clearest view of the planet and its rings that has been observed in more than 30 years. This is also the first time Neptune has been observed at infrared wavelengths, giving astronomers a whole new look at the planet. The image reveals striking detail of Neptune’s rings, some of which have not been observed since Voyager 2 flew by this planet in 1989. 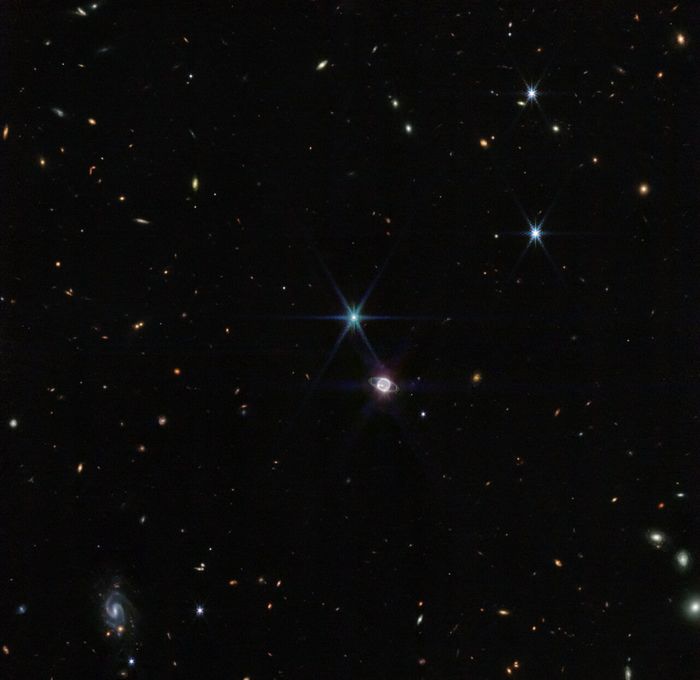 The Near-Infrared Camera (NIRCam) captured Neptune at infrared wavelengths for the first time. The image shows several bright and narrow rings, as well as some fainter dust bands. When this planet was imaged by the Hubble Space Telescope at visible wavelengths, it appeared very bright and very blue. This blue appearance is caused by the gaseous methane that makes up Neptune, which is also composed of hydrogen, helium, and other elements which are heavier than these two. At infrared wavelengths, methane absorbs sunlight, which makes Neptune appear quite dark in the JWST images, except where high-altitude clouds are present. These clouds are composed of methane ice and reflect sunlight before it can be absorbed by the methane gas; this effect can be readily seen in the JWST images as bright streaks and spots.

A thin line of brightness which encircles the equator of the planet is also visible in the image. This could be a signature of global atmospheric circulation that powers winds and storms on Neptune. At the equator, the atmosphere descends and warms, and glows at infrared wavelengths, unlike the cooler gases that surround the equator.

The northern pole of Neptune is just out of view in this image, but it appears as if the planet is brighter at the pole. There is a vortex at the southern pole that is visible, and the image reveals clouds that surround it.

The image also captures 7 of Neptune’s 14 known moons. A bright point of light is visible, which shows the signature diffraction strikes that can been seen in astronomical images – and are indicative of oversaturation or too might light. This bright point is actually one of Neptune’s moons, Triton. This moon is covered in condensed nitrogen and reflects approximately 70% of the sunlight that hits it, which is why it appears so bright.

Additional studies of both Triton and Neptune are planned with JWST in the near future.

About the Author
Kristina Punzi, Ph.D.
PhD in Astrophysics
I'm a stellar astrophysicist by training with a passion for formal and informal education and diversity and inclusion in STEM. I love to take a humanistic approach to my work and firmly believe that all of humanity is united under one sky.
You May Also Like
AUG 16, 2022
Chemistry & Physics

AUG 16, 2022
Balloons Sent from the Earth Could Detect Quakes on Venus
During the Cold War, the US military launched a secret project to spy on the Soviet Union by sending microphones attache ...
Written By: Amanpreet Kaur
AUG 20, 2022
Chemistry & Physics

AUG 20, 2022
Biggest Black Hole Jet from A Nearby Galaxy
There is an extremely active black hole at the very center of galaxy NGC 2663 that is releasing an enormous amount of en ...
Written By: Amanpreet Kaur
OCT 19, 2022
Cell & Molecular Biology

OCT 19, 2022
Return of the Zombie Bacteria
Bacterial cells may shut down for many reasons. But how do they know when to wake up? Researchers have found the answer.
Written By: Carmen Leitch
OCT 18, 2022
Space & Astronomy

Health & Medicine
The Healing Power of Nature on the Brain