Nipah virus is one of the world's deadliest viruses. It has caused several small outbreaks in Southeast Asia since it emerged in 1999 in Malaysia. Now, health authorities in India are trying to contain an outbreak of Nipah virus in the southern state of Kerala. A twelve-year-old boy was confirmed to have the viral infection; he died last weekend. Authorities are working quickly to trace his contacts. Twenty of them who are considered high risk because they are close family members are now in strict isolation. Two healthcare workers who treated the boy are now showing symptoms of Nipah virus infection. 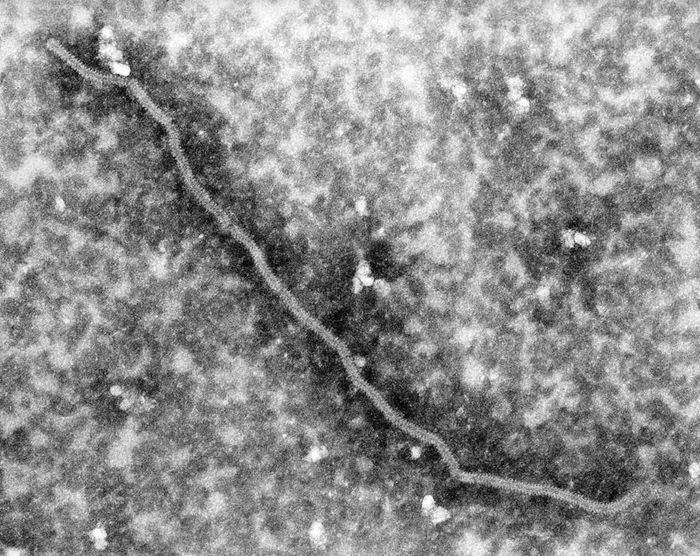 Everything in a two-mile radius of the boy's home has been closed off, and people in the area are being screened for symptoms. Neighboring states are on high alert for anyone showing symptoms of the virus, which is thought to have an incubation period of four to fourteen days, though some research has suggested that it could be as long as 45 days.

Symptoms of infection in people include headache and fever, followed a few days later by respiratory symptoms like a cough and sore throat. More serious symptoms usually begin soon after, like drowsiness, confusion, coma, encephalitis and death. The virus may be fatal in 40 percent to as many as 75 percent of cases. Survival rates may depend on how the disease is managed in the clinic. About 20 percent of people who survive a Nipah infection have persistent neurological symptoms like seizures.

Although fruit bats that live in Ghana, Madagascar, Indonesia, Cambodia, the Philippines, and Thailand are the natural hosts of Nipah virus, they can transmit the zoonotic virus to dogs, cats, pigs, goats, sheep, and horses, usually in Southeast Asia. Animals used in agriculture all over the world pose some risk of spreading different types of viral infections, making surveillance important not only in human clinics, but also in industry.

In the first outbreak, many infected people came into direct contact with infected animals. But in later outbreaks, there were higher rates of human-to-human transmission. Right now, we don't know how long the virus can persist in human body fluids, or on contaminated foods in the environment. It may also be possible to spread Nipah virus through food that's been contaminated with bat urine or saliva, like raw date palm juice.

The infectiousness of a virus can depend on many factors, including how many people tend to pick up the pathogen from an infected individual, how the infection is transmitted, how good surveillance for pathogens is in the area where infections are occurring, and more. It could depend on the virus, the hosts that are infected, and many other social and institutional influences.

Some viruses that cause mild infections have persisted in part because they're easily transmitted and they don't make their hosts extremely ill, which means the host is free to move around and infect others.

A virus's need for a host can also make deadly viruses 'self-limiting;' they make their hosts so sick that they become bedridden or die, and are unable to infect a lot of other people. A pathogen might accomplish both, however, with a long incubation period before the onset of symptoms; infected people can pass the pathogen on to others before any sign of illness appears.

Another factor is the ability of viruses to mutate. In places where people and animals mingle closely, there are more chances for that viral mutation to occur, according to epidemiologists. Scientists have cautioned that as people encroach on natural habitats, they also increase the risk of zoonotic infection.

There is no treatment for Nipah virus infection, clinicians can only attempt to support the health patient and treat their symptoms. The virus has long been considered a major public health concern.

JUL 15, 2021
Host Genetics Can Influence the Microbiome
The human microbiome is intimately connected to our health; the genes and proteins expressed by gut microbes can influen ...
Written By: Carmen Leitch
JUL 29, 2021
Immunology

JUL 29, 2021
Scientists Discover Bacterial Life on Human Fetuses
A developing fetus in its second trimester of life is changing at an extraordinarily rapid pace––bones are b ...
Written By: Tara Fernandez
AUG 05, 2021
Microbiology

AUG 05, 2021
Cheers to Fermentation - Beer Day 2021
After coffee and tea, beer is the third most popular beverage in the world, and it's been a part of our societies an ...
Written By: Carmen Leitch
AUG 10, 2021
Microbiology

AUG 18, 2021
Researchers Learn How a 'Crop-Killing' Bacterium Infects Plant Cells
In a world with a growing population and a changing environment, food security is an important issue. Scientists have be ...
Written By: Carmen Leitch
SEP 07, 2021
Microbiology

Cancer
Can a Mole Fight Melanoma?