Getting RNA-Based Medicine Past the Blood-Brain Barrier

RNA molecules serve several functions, one of which is to help the cell generate proteins from active genes. It also may be possible to treat many diseases by targeting RNA molecules with a system called siRNA (small interfering RNA). These molecules are typically easy to manufacture and have recently been shown to act on biochemical pathways that have previously been elusive.  But sometimes it's difficult to get RNA-targeting drugs where they need to go to have an impact, like into the brain. 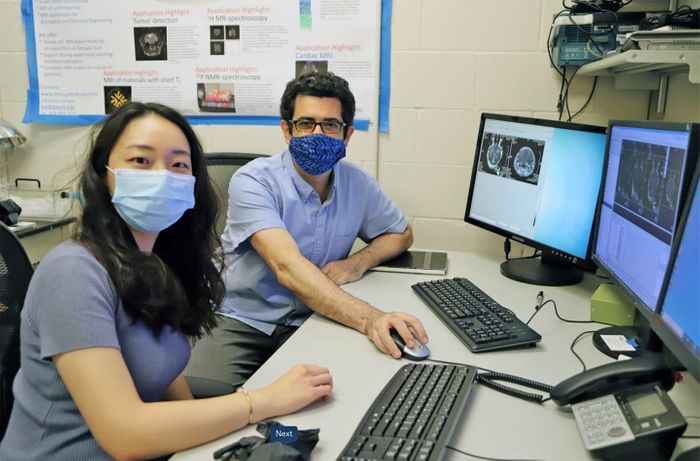 Though the brain is protected by a barrier, researchers have now created a way to deliver siRNA molecules there. The work, which was reported in Science Advances, uses ultrasound and nanoparticles packed with siRNA molecules to get by the blood-brain barrier and target brain tumors with medicine.

"We're able to make this drug more available to the brain and we're seeing a substantial increase in tumor cell death, which is huge," said corresponding study author Costas Arvanitis, assistant professor at Georgia Tech's George W. Woodruff School of Mechanical Engineering (ME). "Our results were very positive, but if you think I'm excited, you haven't talked to oncologists - they're ten times as excited," Arvanitis said.

RNA-based molecules don't usually stick around in the body for a long time, which can be good, but also means that cells won't have access to RNA-based drugs for long before they're degraded or otherwise lost. Cells may also not take them up efficiently. To improve delivery and make them last longer, scientists have created nanoscale carriers to move them around. But these nanocarriers are too big to move through the blood-brain barrier.

Arvanitis and collaborators have now modified the ultrasound and combined it with microbubbles, tiny bits of gases in the bloodstream that vibrate in response to ultrasound waves. They tested it with a mouse model.

"Focusing multiple beams of ultrasound energy onto a cancerous spot caused the microbubbles' vibrations to actually stretch, pull, or shear the tight junctions of endothelial tissue that make up the blood-brain barrier, creating an opening for drugs to get through," explained ME grad student Yutong Guo.

The nanocarriers contain siRNA, which is able to bind to active mRNA molecules to stop them from expressing proteins. The idea is to halt the expression of genes that promote cancer formation. The approach worked in mouse models of preclinical and pediatric brain cancer. Single-cell analysis indicated that harmful protein levels were reduced and tumor cells were dying.

This tool has been in development for years, and recently, clinical trials have shown that it's safe. This work might be the first to show that it can be used to deliver nanoparticles to brain tumor cells directly.

"This is completely tunable," Arvanitis said. "We can fine-tune the ultrasound pressure to attain a desired level of vibration and by extension drug delivery. It's non-invasive, because we are applying sound from outside the brain, and it's very localized because we can focus the ultrasound to a very small region of the brain."

Arvanitis noted that "this technology can provide treatment with minimal side effects, which is very exciting. Now we are moving forward to try and identify what components are missing to translate this technology to the clinic."

MAY 11, 2021
Problems in Human Egg Fertilization Are Common
This ©MPI for Biophysical Chemistry microscopy image shows a bovine egg after fertilization.
Written By: Carmen Leitch
MAY 17, 2021
Microbiology

MAY 17, 2021
Bacteria Can Time Their DNA Replications by the Circadian Clock
The circadian rhythm is the body's clock, and it influences physiology at the cellular level; it can help animals, inclu ...
Written By: Carmen Leitch
MAY 17, 2021
Genetics & Genomics

MAY 17, 2021
Diagramming Connections in the Brain with Barcodes
The billions of neurons in the brain form a complex network, as shown in this image from CSHL scientists Xiaoyin Chen an ...
Written By: Carmen Leitch
MAY 19, 2021
Cell & Molecular Biology

MAY 19, 2021
How Plant Cell Walls Stay Strong but Flexible
Plant cell walls have a special ability to expand without breaking or weakening, which is crucial for plant growth. New ...
Written By: Carmen Leitch
JUN 01, 2021
Microbiology

JUN 01, 2021
A Closer Look at a Potential Bioweapon
Francisella tularensis is a naturally occurring bacterium found throughout the Northern Hemisphere that is extremely vir ...
Written By: Carmen Leitch
JUN 06, 2021
Genetics & Genomics